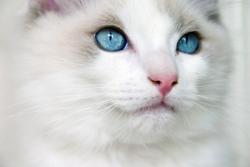 In the early 1960’s a women in Riverside, California, by the name of Ann Baker created the Ragdoll by breeding what was belived to be a white female Persian-type cat to a Seal Point Birman. One of the male offspring from the breeding was then bred to Burmese. This was the foundation for the Ragdoll.

The docile and floppy nature of the ragdoll is a characteristic thought to be passed down from the Persian and Birman breed. There are contrary statements on whether this trait might be the result of genetic mutation. The extreme docility of some individuals have led to the myth that Ragdolls are pain-resistant. Some breeders in Britain have tried to breed away from the limpness due to concerns that extreme docility “might not be in the best interest of the cat.” The Ragdoll is describe as affectionate, intelligent, relaxed in temperament, gentle and easy to handle.

The Ragdoll is one of the largest domesticated cat breeds with a sturdy body, large frame and proportionate legs. A fully grown female weighs from 8 to 15 pounds. The males weigh from 12 to 20 pounds. The genes for colouration are also responsible for the blue eyes of the Ragdoll. More intense shades of blue are favored in the show ring. While the breed has a plush coat, lack of a dense under coat reduces shading and matting.

Ragdoll are typically low maintenance cats. There are however things you can do to help keep your Ragdoll cat well groomed. Brushing them on a daily basis helps to prevent hair balls from forming and lessens unwanted shedding on furniture or clothing.